Okay, so I wasn’t all that nice.  In my defense, if you lack a sense of humor and are blessed with hyper-active and easily hurt feelings, you should probably not hang out on an off-color adult oriented humor page.

Sometimes, I just can’t help myself.

Seriously….show of hands, folks. How many people really thought this was an intentional slight against the handicapped? Geez. Try decaf, dude. And TURN OFF YOUR DAMN CAPS-LOCK.

My comment would, of course, be the last one.  My troll refuses to talk to me now.  Sniff.

Here’s what I have so far learned during my abrupt relocation to a new city.

Okay, the sad thing here is that they actually do believe they are being persecuted and unfairly labeled as a hate group.  The level of blindness in operation here simply staggers me.

Umm…..if you stopped yelling at the top of your voices about all the things you hate, perhaps we would stop ‘attacking’ you with the truth.

*picture taken from the Facebook page of The Equality Mantra.

I am up quite early this morning, in a silent house filled with my sleeping family, watching the sun come up.  In about half an hour or so, there will be a little boy chirping and singing in the next room, but for now nobody needs me, or wants anything from me.  This is my net surfing, coffee drinking, sneak in a hot shower time.  In honor of a beautiful morning full of happy vibes, I thought I would share what I am watching right now with all of you, so y’all can all have a smile first thing this morning, too.

This is every cat I have ever owned.  I have yet to see one of these clips that doesn’t make me smile.  All of y’all have a beautiful day, afternoon, evening, wherever you are!

My favorite comment on Ryan that I have seen so far today.

And let me tell you, if anyone in the WORLD is qualified to recognize a smirking bastard, it’s Maher………

Wow.  Two quotes in less than a week from Mr. Bill that I agree with that don’t manage to simultaneously hack me off with some sneaky backdoor slap.  Will wonders never cease.

* Thanks to the Facebook page of Formidable Republican Opposition, from whom this image was taken

After weeks of no rain, and watching everything in my yard curl up, get crunchy, & die, we are now on day 2 of rain.  It is 0430 and still over 90 degrees, but at least we have a little moisture now.  In honor of the rain and all the happy vibes it gives me, no ranting this morning.  Instead, I dug around my favorite humor sites & pages and offer this:

thanks to My Prozac Moment 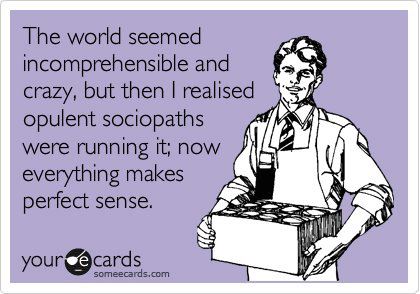 In the wake of the zombie fever fueled wave of terror induced by news from Florida the past several days, perhaps this handy and informative article from the Huffington Post will calm you & ease your very natural fear of turning into a face-devouring Hannibal Lecter clone after exposure to bath items.  This concludes this Public service announcement.

I never felt I needed an excuse, but it’s nice to know I’ve got one. 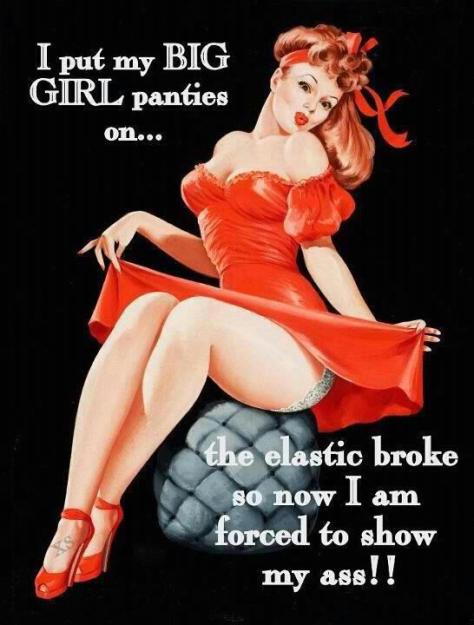 That’s my story. I’m gonna stick with it.

When I was very young indeed, I watched Bill Cosby perform his comedy concert “Bill Cosby – Himself” on Home Box Office with my parents.  It made quite an impression on me.  The next several weeks at school my friends and I kept doing bits for each other, aided by a cassette recording of the show I had been thoughtful enough to make while it was on.  Yes, I am that old, folks.  Once upon a time, we had LP recordings of movies, tv shows, and stand-up comedy routines.  Some of the really cool ones came with booklets and fold-outs containing pictures of the act or show in question.  When those weren’t available, the only way we had to listen to them was to tape them.  At this point I would like to offer my sincere opinion that any of you not old enough to have owned a 33 or 45 of “Raiders Of The Lost Ark” or “Disney’s Enchanted Tiki Room” just simply missed out.  Listening to those recordings forced us to use our imaginations and engage with the story almost as much as books.  I almost miss it.

In 1983, at the age of 10, I was floored by his thoughts on visiting the dentist.  That, I could relate to.  I slayed ’em in the school yard with my own performance of the art of conversation with half my face sliding off my skull.  Oh, sure, I could tell the rest of it must have been funny as well, because my mother cackled all the way through it.  My grandmother got practically hysterical during the monologue about children, but it was mostly lost on me.

Flash forward about 4-5 years to 1988-89.  Flipping channels, I stumbled upon Cosby’s special again.  The dentist was as funny as ever, but suddenly the segment about drinking and drugs resonated with me.  Not necessarily because of life experience so much as the fact that I was finally old enough to grasp the concept of what he was saying.  I still remember laughing so hard that I ended up wheezing after he thanked the toilet bowl for being cool on the side.

1992 rolled around.  My daughter was about 12 months old.  This time I found a VHS on my dad’s movie shelf and decided to kill an  afternoon with it.  As before, what had been funny remained just as fresh and hilarious as I remembered it.  Now, however, the funniest bits were his commentary on the ability of small children to seek out and discover cookies and junk food anywhere in the house, and little Jeffery.  I laughed about Jeffery’s mother punching his father in the face for at least a couple of days after that.

The summer of 2000 I noticed “Himself”  on the program guide and set it up to record.  Later that night I re-watched it yet again.  Lo and behold, now the best part was Cosby’s description of the change in his wife during the course of the marriage and after the children came.  The conniption hit almost too close to home for me.  I confess, my own skull has been known to split and let out a green glow………….sigh.  Aw, c’mon, admit it.  It’s funny because it’s true, you know.  I can still hear that stressed, shrill, frazzled voice…..”WHERE did they get the chocolate cake from?” and the stereotypical response, “They ASKED for it.” Then, of course, Bill’s admission — We are dumb, but we are not so dumb.  I always suspected that was true, you know.

Now here we are, 2012.  None of it is any less funny, but now that I have 2 small kiddos whooping through my house, I find that Cosby’s observation about multiple children being a different level of parenting from having one child to be my favorite part.  I laugh every bit as much when I run across it as I ever did, but I do find that the bits about the stories told by his father really make me laugh the hardest.  “Uphill.  Both ways.  In 5 feet of snow.”  Bah-hah-hah!

The older we get, the more life experience we gain, the more layers of understanding we have and thereby the more humor we are able to enjoy.  I love that a special I first watched with my parents still makes me laugh until I cry.  It is a remarkably cool thing that I can still enjoy it with my folks, and see them laughing at things I haven’t even picked up on yet.  I look at my kids laughing and see where I have been.  Then I look at my parents and see where I am going.  Thanks, Bill.

Yay, me! Thanks to the Ranting Papizilla, from whom I received this award.

Stolen, under cover of darkness, from Clown On Fire

Getting Bigger Every Day…..

Never In my Arms But Forever In My Heart…….

Yeah. I twittered. That’s how we roll in the shire.

Error: Twitter did not respond. Please wait a few minutes and refresh this page.

The Meat & Potatoes of Life

A Good Blog is Hard to Find

"Let me live, love and say it well in good sentences." - Sylvia Plath

From Global to Local

Food sustainability in the Shenandoah Valley begins in our own backyard

The films of Klaus Kinski

One of Those Women

I'm not one of those women. Well, except for when I am.

Health & Family
the thoughts of a fox
Martyr Barbie

In Memory of Patrick

Turning the lights on brightly...

The Joy of Tax Law

The official blog of JDKatz, P.C.

Art is a selective re-creation of reality

writes a short story every week

Dedicated to Hip Hop and Freshness

Between An Island of Certainties and the Unknown Shore

Tea and Loafing in Ontario,Canada

4 out of 5 dentists recommend this WordPress.com site

The World of Special Olympics

The Personal is Historical

A site to discuss better education for all